History Of The Shawnee: Part 3

Bezallion informed the governor that the Shaonois of Carolina he was told had killed several Christians; whereupon the government of that province raised the said flat headed Indians, and joined some Christians to them, besieged and have taken, as it is thought, the said Shaonois town.” Those who escaped probably fled to the north and joined their kindred in Pennsylvania. In 1708 Gov. Johnson, of South Carolina, reported the “Savannahs” on Savannah River as occupying 3 villages and numbering about 150 men 6. In 1715 the “Savanos” still in Carolina were reported to live 150 miles northwest of Charleston, and still to occupy 3 villages, but with only 233 inhabitants in all.

A part of those who had come from the south in 1694 had joined the Mahican and become a part of that tribe. Those who had settled on the Delaware, after remaining there some years, removed to the Wyoming valley on the Susquehanna and established themselves in a village on the west bank near the present Wyoming, Pennsylvania. It is probable that they were joined here by that part of the tribe which had settled at Pequea, which was abandoned about 1730. When the Delawares and Munsee were forced to leave the Delaware River in 1742 they also moved over to the Wyoming valley, then in possession of the Shawnee, and built a village on the east bank of the river opposite that occupied by the latter tribe. In 1740 the Quakers began work among the Shawnee at Wyoming and were followed two years later by the Moravian Zinzendorf. As a result of this missionary labor the Shawnee on the Susquehanna remained neutral for some time during the French and Indian war, which began in 1754, while their brethren on the Ohio were active allies of the French. About the year 1755 or 1756, in consequence of a quarrel with the Delawares, said to have been caused by a childish dispute over a grasshopper, the Shawnee abandoned the Susquehanna and joined the rest of their tribe on the upper waters of the Ohio, where they soon became allies of the French. Some of the eastern Shawnee had already joined those on the Ohio, probably in small parties and at different times, for in the report of the Albany congress of 1754 it is found that some of that tribe had removed from Pennsylvania to the Ohio about 30 years previously, and in 1735 a Shawnee band known as Shaweygria (Hathawekela), consisting of about 40 families, described as living with the other Shawnee on Allegheny river, refused to return to the Susquehanna at the solicitation of the Delawares and Iroquois. The only clue in regard to the number of these eastern Shawnee is Drake’s statement that in 1732 there were 700 Indian warriors in Pennsylvania, of whom half were Shawnee from the south. This would give them a total population of about 1,200, which is probably too high, unless those on the Ohio are included in the estimate.

Having shown the identity of the Savannah with the Shawnee, and followed their wanderings from Savannah river to the Ohio during a period of about 80 years, it remains to trace the history of the other, and apparently more numerous, division upon the Cumberland, who preceded the Carolina band in the region of the upper Ohio river, and seem never to have crossed the Alleghanies to the eastward. 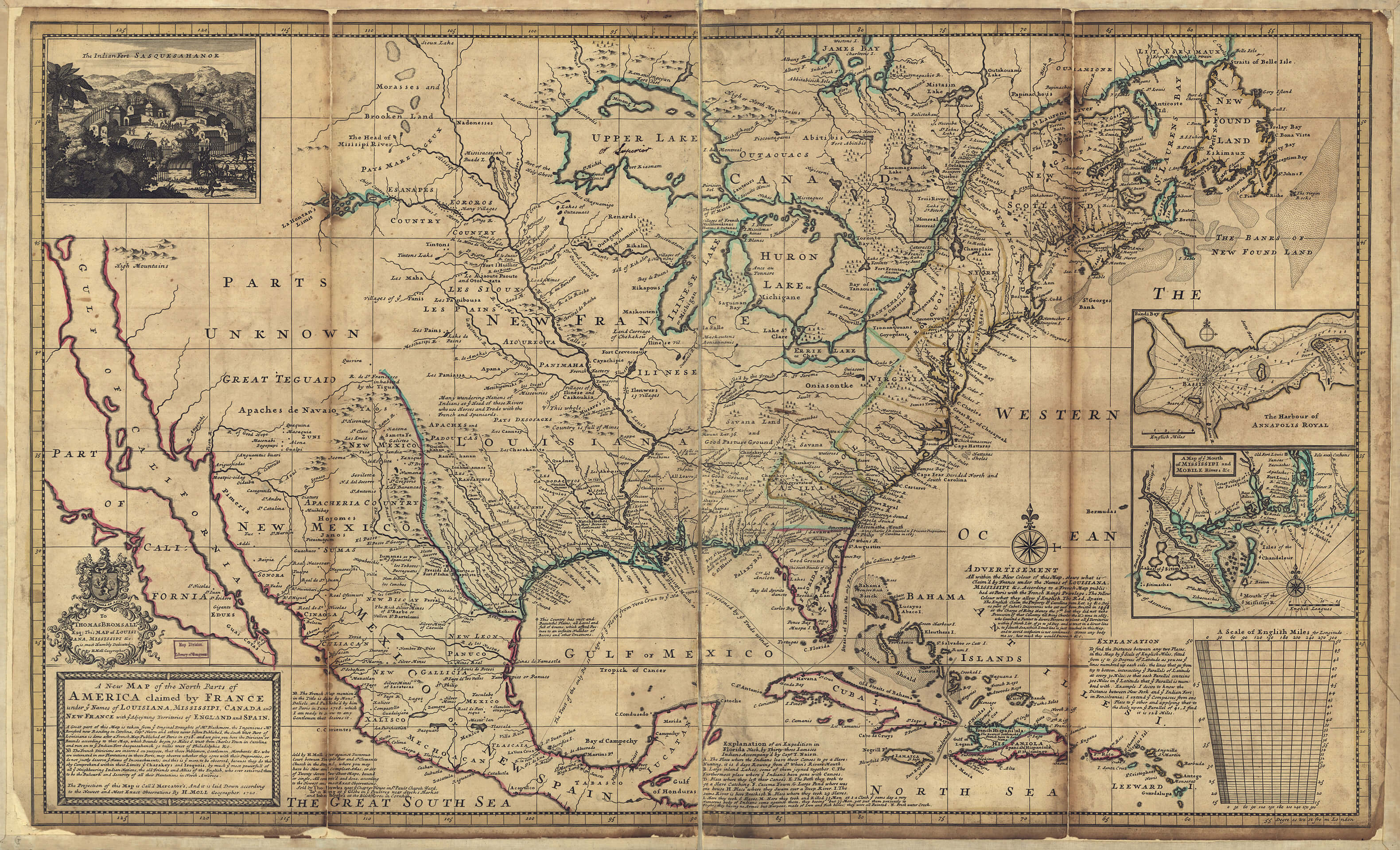 Moll’s map of 1720 has “Savannah Old Settlement” at the mouth of the Cumberland, showing that the term Savannah

These western Shawnee may possibly be the people mentioned in the Jesuit Relation of 1648, under the name of “Ouchaouanag,” in connection with the Mascoutens, who lived in northern Illinois. In the Relation of 1670 we find the “Chaouanon” mentioned as having visited the Illinois the preceding year, and they are described as living some distance to the south east of the latter. From this period until their removal to the north they are frequently mentioned by the French writers, sometimes under some form of the collective Iroquois name Toagenha, but generally under their Algonquian name Chaouanon. La Harpe, about 1715, called them Tongarois, another form of Toagenha. All these writers concur in the statement that they lived upon a large southern branch of the Ohio, at no great distance east of the Mississippi. This was the Cumberland River of Tennessee and Kentucky, which is called the River of the Shawnee on all the old maps down to about the year 1770.

When the French traders first came into the region the Shawnee had their principal village on that river near the present Nashville, Tennessee. They seem also to have ranged northeastward to Kentucky River and southward to the Tennessee. It will thus be seen that they were not isolated from the great body of the Algonquian tribes, as has frequently been represented to have been the case, but simply occupied an interior position, adjoining the kindred Illinois and Miami, with whom they kept up constant communication. As previously mentioned, the early maps plainly distinguish these Shawnee on the Cumberland from the other division of the tribe on Savannah River.

These western Shawnee are mentioned about the year 1672 as being harassed by the Iroquois, and also as allies and neighbors of the Andaste, or Conestoga, who were themselves at war with the Iroquois. As the Andaste were then incorrectly supposed to live on the upper waters of the Ohio River, the Shawnee would naturally be considered their neighbors. The two tribes were probably in alliance against the Iroquois, as we find that when the first body of Shawnee removed from South Carolina to Pennsylvania, about 1678, they settled adjoining the Conestoga, and when another part of the same tribe desired to remove to the Delaware in 1694 permission was granted on condition that they make peace with the Iroquois. Again, in 1684, the Iroquois justified their attacks on the Miami by asserting that the latter had invited the Satanas (Shawnee) into their country to make war upon the Iroquois. This is the first historic mention of the Shawnee evidently the western division in the country north of the Ohio River. As the Cumberland region was out of the usual course of exploration and settlement, but few notices of the western Shawnee are found until 1714, when the French trader Charleville established himself among them near the present Nashville. They were then gradually leaving the country in small bodies in consequence of a war with the Cherokee, their former allies, who were assisted by the Chickasaw. From the statement of Iberville in 1702 8 it seems that this was due to the latter’s efforts to bring them more closely under French influence. It is impossible now to learn the cause of the war between the Shawnee and the Cherokee. It probably did not begin until after 1707, the year of the final expulsion of the Shawnee from South Carolina by the Catawba, as there is no evidence to show that the Cherokee took part in that struggle.

From Shawnee tradition the quarrel with the Chickasaw would seem to be of older date. After the reunion of the Shawnee in the north they secured the alliance of the Delawares, and the two tribes turned against the Cherokee until the latter were compelled to ask peace, when the old friendship was renewed. Soon after the coming of Charleville, in 1714, the Shawnee finally abandoned the Cumberland valley, being pursued to the last moment by the Chickasaw. In a council held at Philadelphia in 1715 with the Shawnee and Delawares, the former, “who live at a great distance,” asked the friendship of the Pennsylvania government. These are evidently the same who about this time were driven from their home on Cumberland river.

To Be Continued Winter 2018