History Of The Shawnee: Part 1

The history of the Shawnee begins in 1669-70. They were then living in two bodies at a considerable distance apart, and these two divisions were not fully united until nearly a century later, when the tribe settled in Ohio. The attempt to reconcile conflicting statements without a knowledge of this fact has occasioned much of the confusion in regard to the Shawnee. The apparent anomaly of a tribe living in two divisions at such a distance from each other is explained when we remember that the intervening territory was occupied by the Cherokee, who were at that time the friends of the Shawnee. The evidence afforded by the mounds shows that the two tribes lived together for a considerable period, both in South Carolina and in Tennessee, and it is a matter of history that the Cherokee claimed the country vacated by the Shawnee in both states after the removal of the latter to the north. It is quite possible that the Cherokee invited the Shawnee to settle upon their eastern frontier in order to serve as a barrier against the attacks of the Catawba and other enemies in that direction. No such necessity existed for protection on their northwestern frontier.

The earliest notices of the Carolina Shawnee represent them as a warlike tribe, the enemies of the Catawba and others, who were also the enemies of the Cherokee. In Ramsey’s Annals of Tennessee is the statement, made by a Cherokee chief in 1772, that 100 years previously the Shawnee, by permission of the Cherokee, removed from Savannah River to the Cumberland, but were afterward driven out by the Cherokee, aided by the Chickasaw, in consequence of a quarrel with the former tribe. While this tradition does not agree with the chronological order of Shawnee occupancy in the two regions, as borne out by historical evidence, it furnishes additional proof that the Shawnee occupied territory upon both rivers, and that this occupancy was by permission of the Cherokee. 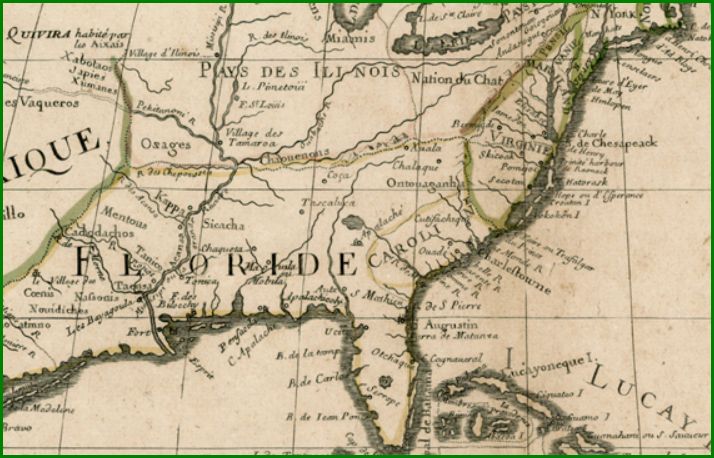 De l’Isle’s map of 1700 places the “Ontouagannha.” which here means the Shawnee, on the headwaters of the Santee and Pedee rivers in South Carolina, while the “Chiouonons” are located on the lower Tennessee River. Senex’s map of 1710 locates a part of the “Chaouenons” on the headwaters of a stream in South Carolina, but seems to place the main body on the Tennessee. Moll’s map of 1720 has “Savannah Old Settlement” at the mouth of the Cumberland, showing that the term Savannah was sometimes applied to the Western as well as to the eastern band.

The Shawnee of South Carolina, who included the Piqua and Hathawekela divisions of the tribe, were known to the early settlers of that state as Savannahs, that being nearly the form of the name in use among the neighboring Muskhogean tribes. A good deal of confusion has arisen from the fact that the Yuchi and Yamasee, in the same neighborhood, were sometimes also spoken of as Savannah Indians. Bartram and Gallatin particularly are confused upon this point, although, as is hardly necessary to state, the tribes are entirely distinct. Their principal village, known as Savannah Town, was on Savannah River, nearly opposite the present Augusta, Ga. According to a writer of 1740 it was at New Windsor, on the north bank of Savannah River, 7 miles below Augusta. It was an important trading point, and Ft Moore was afterward built upon the site. The Savannah river takes its name from this tribe, as appears from the statement of Adair, who mentions the “Savannah river, so termed on account of the Shawano Indians having formerly lived there,” plainly showing that the two names are synonyms for the same tribe. Gallatin says that the name of the river is of Spanish origin, by which he probably means that it refers to “savanas,” or prairies, but as almost all the large rivers of the Atlantic slope bore the Indian names of the tribes upon their banks, it is not likely that this river is an exception, or that a Spanish name would have been retained in an English colony. In 1670, when South Carolina was first settled, the Savannah were one of the principal tribes southward from Ashley River. About 10 years later they drove back the Westo, identified by Swanton as the Yuchi, who had just previously nearly destroyed the infant settlements in a short but bloody war. The Savannah seem to have remained at peace with the whites, and in 1695, according to Gov. Archdale, were “good friends and useful neighbors of the English.” By a comparison of Gallatin’s paragraph with Lawson’s statements from which he quotes, it will be seen that he has misinterpreted the earlier author, as well as misquoted the tribal forms.

Lawson traveled through Carolina in 1701, and in 1709 published his account, which has passed through several reprints, the last being in 1860. He mentions the “Savannas” twice, and it is to be noted that in each place he calls them by the same name, which, however, is not the same as any one of the three forms used by Gallatin in referring to the same passages. Lawson first mentions them in connection with the Congaree as the “Savannas, a famous, warlike, friendly nation of Indians, living to the south end of Ashley River.” In another place he speaks of “the Savanna Indians, who formerly lived on the banks of the Messiasippi, and removed thence to the head of one of the rivers of South Carolina, since which, for some dislike, most of them are removed to live in the quarters of the Iroquois or Sinnagars [Seneca], which are on the heads of the rivers that disgorge themselves into the bay of Chesapeak.” This is a definite statement, plainly referring to one and the same tribe, and agrees with what is known of the Shawnee.