Tecumseh was born in 1768 near Chillicothe, Ohio. His father, Puckshinwau was a minor Shawnee war chief. His mother Methotaske was also Shawnee. Tecumseh came of age during the height of the French and Indian War and in 1774 his father was killed at the Battle of Point Pleasant during Lord Dunmore’s War. This had a lasting effect on Tecumseh and he vowed to become a warrior like his father. As a teenager he joined the American Indian Confederacy under the leadership of Mohawk Chief Joseph Brant. Brant encouraged tribes to share ownership of their territory and pool their resources and manpower to defend that territory against encroaching settlers. Tecumseh led a group of raiders in these efforts, attacking American boats trying to make their way down the Ohio River. These raids were extremely successful, nearly cutting off river access to the territory for a time. In 1791 he further proved himself at the Battle of the Wabash as one of the warriors who defeated General Arthur St. Clair and his army. Tecumseh fought under Blue Jacket and Little Turtle and the American Indian Confederacy was victorious slaying 952 of the 1,000 American soldiers in St. Clair’s army. St. Clair was forced to resign. In 1794 Tecumseh also fought in the Battle of Fallen Timbers. This decisive conflict against General Anthony Wayne and his American forces ended in a brutal defeat for the American Indian Confederacy. A small contingency of about 250 stayed with Tecumseh after the battle, following him eventually to what would become Prophetstown and a new pan-Indian alliance. 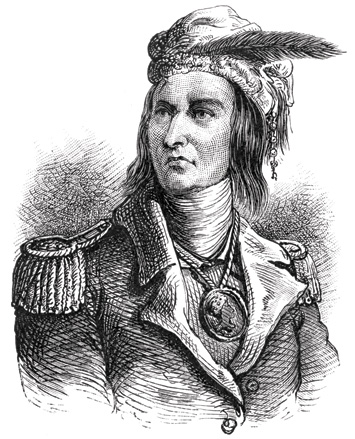 Portrait of the Shawnee military and political leader Tecumseh, ca. 1800-1813. He worked with his brother Tenskwatawa, known as 'The Prophet,' to unite American Indian tribes in the Northwest Territory to defend themselves against white settlers.

Tecumseh’s brother Tenskwatawa joined him at Prophetstown, also known as Tippecanoe in Indiana Territory and in 1808 the two men began recruiting a large multi-tribal community of followers under a message of resistance to settlers, the American government, and assimilation. Tecumseh traveled north to Canada and south to Alabama in an effort to recruit men to his cause. Meanwhile, William Henry Harrison, governor of Indiana Territory was negotiating treaties and utilizing American forces to put pressure on those tribes still in Indiana and especially those allied with Prophetstown. In 1809 Harrison, signed the Treaty of Fort Wayne which allotted him a massive amount of American Indian territory thus increasing Tecumseh’s efforts and amplifying his message. Tecumseh was away from Prophetstown on a recruitment journey when Harrison launched a sneak attack now known as the Battle of Tippecanoe. The American forces cleared the encampment and then burned it to the ground. It was a severe blow to the confederacy and a harbinger of war to come.

On June 1, 1812 under the advisement of President Madison, Congress declared war on Great Britain. In the Northwest Territory, American Indian tribes found themselves pulled in two separate directions – side with the British or with the Americans. Tecumseh and his confederacy sided with the British. He and his men were assigned to overtake the city of Detroit with Major General Isaac Brock. The siege of Detroit was a success due in no small part to Tecumseh’s military strategy. He continued to support British efforts under Major-General Procter at the Siege of Fort Meigs. The siege failed and morale waned as a result.

In the fall of 1813 as conditions around Detroit worsened, Procter began a retreat east toward Niagara. Tecumseh requested arms so that his men could stay in the Northwest Territory and continue to defend their lands. Procter agreed to make a stand at the forks of the Thames River. However, when forces reached the site communication broke down and some men deserted while others continued east. When the Americans attacked, large sections of forces broke leaving about 500 hundred American Indians to hold back 3,000 Americans. Tecumseh was fatally wounded in the battle. It is unknown who killed him or what happened to his remains. His death began a rapid decline in American Indian resistance and the War of 1812 is marked as the beginning of removal in the upper Midwest.