Originally from the southern states of Tennessee and South Carolina, the Shawnee Indians moved often before the first group arrived in the Wyandotte and Johnson County area.

In 1825, the Shawnee living near Cape Girardeau, Missouri, were removed from their homes by the United States government and given a tract of land south of the Kansas River and west of the Missouri River. Relocation began in 1826. The 1.6 million acre reservation extended west for many miles, but the Shawnee chose to occupy only a small portion. Few lived west of Lawrence, and the majority remained in Wyandotte and Johnson counties. Their numbers grew when Shawnee from Ohio began arriving later that year. 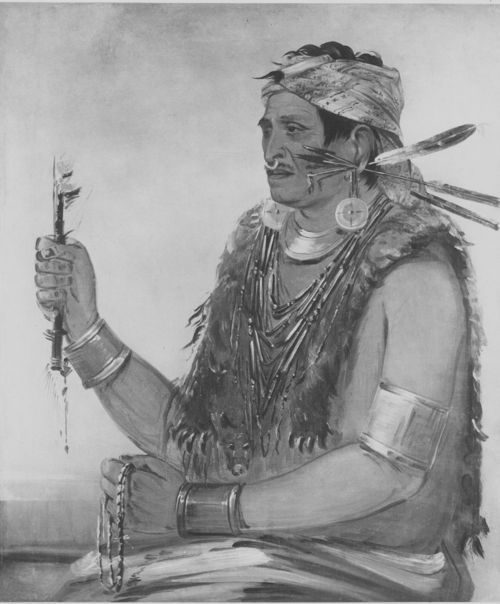 The spiritual leader Tensquatawa, the Shawnee Prophet, was among the Ohio Shawnee, arriving in 1828. In the early 1800s, Tensquatawa, the younger brother of Shawnee leader Tecumseh, had encouraged an alliance of all Indians against the American encroachment and preached that tribal leaders did not have the right to sign away tribal lands. His message caught on with young members of the tribe, and he developed a substantial following. In 1808 he established a village in Indiana called Prophetstown, and it thrived for three years. When Tensquatawa moved to Kansas, he established a new Prophetstown near the present South 26th Street and Woodend Avenue in Kansas City. His high regard with the Shawnee, however, had waned, and Tensquatawa never regained his status; the new town did not prosper. In the early 1830s he moved to a small cabin near a spring in the present Argentine area of Kansas City, where he died in 1837.

In 1854 the U.S. government reduced the Kansas reservation to 160,000 acres and parceled out the rest of the land in 200 acre allotments. Susan White Feather purchased the property near the spring that was formerly occupied by Tensquatawa, and the site became known as White Feather Spring, the final resting place of the Shawnee Prophet.

During and after the Civil War, white settlers antagonized the Shawnee and a great many were ready to move on by the late 1860s. Some remained on the Kansas reservation, but most of the Shawnee relocated to a Cherokee reservation in Oklahoma.

Author information: The Kansas Historical Society is a state agency charged with actively safeguarding and sharing the state’s history.