Tecumseh, Treaty of Fort Wayne and the Comet of 1811

Tecumseh, Treaty of Fort Wayne and the Comet of 1811

In September 1809 William Henry Harrison, then governor of the Indiana Territory, invited the Potawatomi, Lenape, Eel River people, and the Miami to a meeting in Fort Wayne, Indiana. In the negotiations, Harrison promised large subsidies and payments to the tribes if they would cede the lands he was asking for.[29] After two weeks of negotiating, the Potawatomi leaders convinced the Miami to accept the treaty as reciprocity, because the Potawatomi had earlier accepted treaties less advantageous to them at the request of the Miami. Finally the tribes signed the Treaty of Fort Wayne on September 30, 1809, thereby selling the United States over 3,000,000 acres (approximately 12,000 km² chiefly along the Wabash River north of Vincennes, Indiana.[29]

Tecumseh was outraged by the Treaty of Fort Wayne, believing that American Indian land was owned in common by all tribes, an idea advocated in previous years by the Shawnee leader Blue Jacket and the Mohawk leader Joseph Brant.[30] In response, Tecumseh began to expand on the teachings of his brother, known as The Prophet, who called for the tribes to return to their ancestral ways. He began to associate the teachings with the idea of a pan-tribal alliance. Tecumseh traveled widely, urging warriors to abandon the accommodationist chiefs and to join the resistance at Prophetstown.[30]

In August 1810, Tecumseh led 400 armed warriors to confront Governor Harrison in Vincennes. Tecumseh demanded that Harrison nullify the Fort Wayne treaty, threatening to kill the chiefs who had signed it.[31] Harrison refused, stating that the Miami were the owners of the land and could sell it if they so chose.[32] Tecumseh left peacefully, but warned Harrison that he would seek an alliance with the British unless the treaty was nullified.[33] 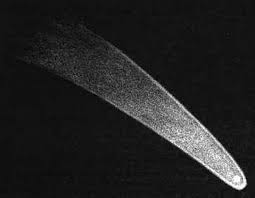 The Great Comet of 1811, as drawn by William Henry Smyth

In March the Great Comet of 1811 appeared. During the next year, tensions between American colonists and Native Americans rose quickly. Four settlers were murdered on the Missouri River and, in another incident, natives seized a boatload of supplies from a group of traders. Harrison summoned Tecumseh to Vincennes to explain the actions of his allies.[33] In August 1811, the two leaders met, with Tecumseh assuring Harrison that the Shawnee intended to remain at peace with the United States.

Afterward Tecumseh traveled to the Southeast on a mission to recruit allies against the United States among the "Five Civilized Tribes." His name Tekoomsē meant "Shooting Star" or "Panther Across The Sky."[34] He told the Choctaw, Chickasaw, Muscogee, and many others that the comet of March 1811 had signaled his coming. He also said that the people would see a sign proving that the Great Spirit had sent him.

While Tecumseh was traveling, both sides readied for the Battle of Tippecanoe. Harrison assembled a small force of army regulars and militia in preparation to combat the Native forces.[35] On November 6, 1811, Harrison led this army of about 1,000 men to Prophetstown, Indiana, hoping to disperse Tecumseh's confederacy.[36] Early next morning, forces under The Prophet prematurely attacked Harrison's army at the Tippecanoe River near the Wabash. Though outnumbered, Harrison repulsed the attack, forcing the Natives to retreat and abandon Prophetstown. Harrison's men burned the village and returned home.[37] This was the end of Tecumseh's dream of a united native alliance against the whites.

On December 11, 1811, the New Madrid earthquake shook the Muscogee lands and the Midwest. While the interpretation of this event varied from tribe to tribe, they agreed that the powerful earthquake had to have meant something. The earthquake and its aftershocks helped the Tecumseh resistance movement as the Muscogee and other Native American tribes believed it was a sign that the Shawnee must be supported and that this was the sign Tecumseh had prophesied. 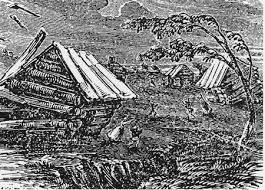 The New Madrid earthquake was interpreted by the Muscogee as a reason to support the Shawnee resistance.