History of the State of Kansas

The Missouri Shawnees were the first Indians removed to the territory set apart for emigrant tribes by the treaties of June, 1825, with the Kanzas and Osages. By treaty made at St. Louis, November 7, 1825, the United States granted "to the Shawnee tribe of Indians within the State of Missouri, for themselves, and for those of the same nation now residing in Ohio who may hereafter emigrate to the west of the Mississippi, a tract of land equal to fifty miles square, situated west of the State of Missouri, and within the purchase lately made from the Osages." 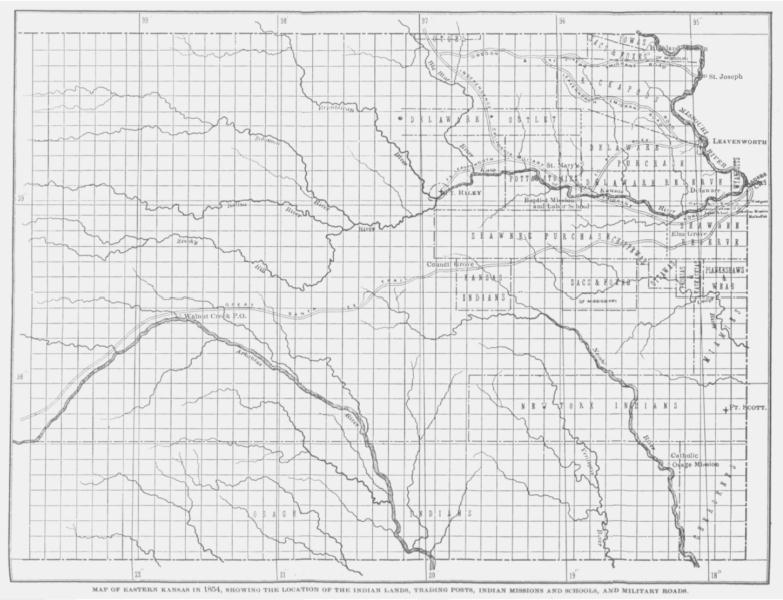 The Shawnees had their ancient home in the basin of the Cumberland River. Their territory was invaded by the Iroquois about the year 1672, and the vanquished Shawnees, fleeing to the South, were scattered over various parts of the country--settling in the Carolinas, at the head-waters of the Mobile River, in Florida, and it is related that one tribe had "quite gone down to New Spain." After a short time, several of the tribes re-united and returned to the vicinity of their old hunting-grounds, forming settlements in the valley of the Ohio, where Father Marquette relates that they were "in such numbers that they seem as many as twenty-three villages in one district, and fifteen in another, lying quite near each other."

Several treaties of peace had been made previous to 1786, with the Shawnees, in common with other tribes, but that of January 31, 1786, was the first concluded with them separately as a nation. By the provisions of this treaty, which was made at the mouth of the Great Miami River, on the northwest bank of the Ohio, the United States allotted to the Shawnees certain lands on the Miami River, contiguous to the reservations of the Wyandots and Delawares, in consideration of which the Shawnees, relinquished "all title, or pretense of title, they ever had to the lands east, west and south of the east, west and south lines before described."

The Wyandots protested against this treaty, on the ground that the lands set apart for the Shawnees had been previously, by treaty, ceded to themselves. The Shawnees remained, however, on the land, sharing the Wyandot hunting and fishing grounds, and it was in consideration of their forbearance at this time that the latter tribe requested the Shawnees to cede to them a portion of their reservation in the Indian Territory, when they attempted to negotiate for removal from Sandusky in 1832.

From the time of the treaty of peace which the Shawnees made with William Penn in 1682 (the first treaty with the whites to which they were a party), the Society of Friends took an intelligent and constant interest in their welfare. Thomas Chalkley, a minister of the London society of the denomination, who visited them as early as 1706, mentions among the peculiarities of the nation its custom of admitting women to its councils. He says: "In the council was a woman who took a part in the deliberations of this council, as well as upon all important occasions.

"On the interpreter being questioned why they permitted a woman to take so responsible a part in their councils, he replied that some women were wiser than some men, and that they had not done anything for years without the council of this ancient, grave woman, who spoke much in this council."

Philanthropic and religious enterprises were necessarily suspended during the long-continued French, English and Indian wars, but after the close of the war of 1812, the Friends again resumed their labors among the Shawnees, establishing a school, and building flour and saw mills at their village in Ohio. Under the prudent and energetic superintendence of Henry Harvey, the tribe made rapid advance in civilization, and in the year 1831, when their lands were bought by Government, preparatory to the removal of the tribe to the West, the Ohio Shawnees were prosperous in an eminent degree.

January 4, 1793, Baron De Carondelet, a Spanish nobleman, granted to bands of Shawanoes and Delawares who desired to settle there, a tract of land about twenty miles square, "lying between the River St. Come and Cape Geredeau, and bounded on the east by the Mississippi, and westwardly by White Water."

The Delawares removed from the tract in 1815; the Shawnees removed from their first location near the cape, and again removed as white settlers encroached on their lands, until, by the treaty of November 7, 1825, they relinquished all title to their Missouri lands, and removed to their reservation in what is now the State of Kansas. In 1831, a treaty was concluded with the Ohio Shawnees, giving them a certain sum for their improvements in that State, and land contiguous to the Missouri Shawnees in Indian Territory. A portion of the tribe removed in 1832; the remainder, in the fall of the following year.

The good results of the habits of thrift and industry which these Shawnees had acquired, aided and encouraged by the influence of the missionaries, who soon settled among them in their new location, were, after a few years, apparent in the comparatively comfortable houses and the well-cultivated fields which multiplied on their reservation.

An act was passed in 1853, granting the Ohio Shawanoes $66,000 additional compensation for their improvements in that State--twenty years after their removal. This sum was paid to the Ohio band at their reservation in Kansas.

On May 10, 1854, the tribe ceded to the United States the entire tract set apart for them November 7, 1825, and conveyed to the tribe by deed, May 11, 1844, containing about 1,600,000 acres, and by a provision of the same treaty, the United States retroceded to the tribe "200,000 acres to be selected between the Missouri State line and a line parallel thereto and west of the same thirty miles distant, which parallel line shall be drawn from the Kansas River to the southern boundary line of the country herein ceded."

Three sections of land were to be set apart to the Missionary Society of the Methodist Church South; 320 acres to the Friends' Shawnee Labor School; 160 acres to the American Baptist Missionary Union; five acres to the Shawnee Methodist Church; and two acres to the Shawnee Baptist Church--all to be considered a part of the retroceded 200,000 acres. The residue of the tract was to be divided, each individual receiving 200 acres, to be deeded in fee simple, and whatever remained to be set apart for any other Shawnees who might thereafter unite with the tribe.

The privilege of selecting lands extended to every head of a family who, though not a Shawnee, had legally married into the nation, according to their customs, all persons adopted into the tribe, all minor orphan children of Shawnees, and all incompetent persons, to have selections made adjacent to their friends and relatives.

Other provisions were as follows: "In the settlement known as Black Bob's Settlement, in which he has an improvement, whereon he resides, and in that known as Long Tail's Settlement, in which he has an improvement, whereon he resides, there are a number of Shawnees who desire to hold their lands in common; it is therefore agreed that all Shawnees, including the persons adopted as aforesaid, incompetent persons, and minor children who reside in said settlements, and all who shall, within sixty days after the approval of the surveys hereinafter provided for by the United States, signify their election to join either of said communities and reside with them, shall have a quantity of land assigned and set off to them in a compact body, at each of settlements aforesaid, equal to 200 acres to each individual in each of said communities."